What is litho (lithographic) printing, what does it mean and how does it work?

Well first of all never be afraid to ask the question, there are plenty of people who have worked within the industry for many years who would struggle to answer this.

The term Lithography comes from the Greek translation of λίθος, lithos, “stone” and γράφειν, graphein, “to write”

The method of printing was and still is based on the principle that oil and water do not mix. Lithographic printing was invented in 1796 by German author & actor Alois Senefelder as an inexpensive way of publishing his material and was kept as a closely guarded secret for many years.

The early method of lithographic printing was to write on or draw an image on to a smooth limestone using oil, fat or wax. The stone was then treated with a mixture of acid and gum arabic, etching the areas of the stone (non image area) which were not protected by the greasy image area.

When the stone was moistened, these etched areas retained water. An oil-based ink could then be applied and would be repelled by the water, sticking only to the original drawing.

The ink would then be transferred on to the waiting paper material, producing a printed page. This method of lithographic printing is still practised today for some fine art reproductions.

So there we have it, we now know where the terminology came from but how does this relate to the modern process and techniques?

Well first off, the modern lithographic technique still works on the principal that oil & water do not mix. Litho is the most common method of commercial printing and is a planographic process as the printing surface is flat rather than a raised surface used for letterpress printing or recessed for gravure printing.

In modern lithography the stone is replaced by a aluminium printing plate which is covered with a polymer coating. The image area is hardened by thermal fusing the coating with a laser. The non image areas remain soft and when removed reveal a surface area that is receptive to water. The very latest methods use no chemistry in the processing of the plate.

Most common methods of lithography are offset lithography. This means that the inked image on the aluminium plate is ‘offset’ (printed) on to a rubber blanket which is wrapped around a rotating cyclinder. The image is then transferred from the blanket to the paper under pressure.

On press the aluminium plate is mounted on to a rotating cylinder that is first rolled with a fine film of water to keep the non image areas clear, before the ink rollers ink up the image area. The image is then transferred to the rubber printing blanket and further on to the paper as described above. 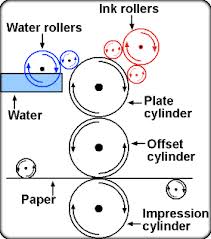 The diagram above gives a simplistic layout view of a common printing unit. Remember one printing unit equals one colour so for a typical modern press printing CMYK there will be four such printing units joined together.

The skill of the pressman is needed to ensure the correct ink water balance throughout the print run and course of the day as the temperatures and atmospheric conditions change.

The principle of water & oil based inks not mixing is a fine balance in modern printing. Too much water on the plate will lead to the image starting to wash out and give inks stability problems, leading to colour control difficulties. Too little water on the plate and the non image areas will start to ink up (catch up).

So there we have a very basic overview of how the process works.

To discuss your next print project call the KMS Litho team today on
01608 737 640 or click here to complete the contact form. We look forward to talking to you.

We use cookies on our website to give you the most relevant experience by remembering your preferences and repeat visits. By clicking “Accept All”, you consent to the use of ALL the cookies. However, you may visit "Cookie Settings" to provide a controlled consent.
Cookie SettingsRead MoreAccept All
Manage consent

This website uses cookies to improve your experience while you navigate through the website. Out of these, the cookies that are categorized as necessary are stored on your browser as they are essential for the working of basic functionalities of the website. We also use third-party cookies that help us analyze and understand how you use this website. These cookies will be stored in your browser only with your consent. You also have the option to opt-out of these cookies. But opting out of some of these cookies may affect your browsing experience.
Necessary Always Enabled
Necessary cookies are absolutely essential for the website to function properly. These cookies ensure basic functionalities and security features of the website, anonymously.
Functional
Functional cookies help to perform certain functionalities like sharing the content of the website on social media platforms, collect feedbacks, and other third-party features.
Performance
Performance cookies are used to understand and analyze the key performance indexes of the website which helps in delivering a better user experience for the visitors.
Analytics
Analytical cookies are used to understand how visitors interact with the website. These cookies help provide information on metrics the number of visitors, bounce rate, traffic source, etc.
Advertisement
Advertisement cookies are used to provide visitors with relevant ads and marketing campaigns. These cookies track visitors across websites and collect information to provide customized ads.
Others
Other uncategorized cookies are those that are being analyzed and have not been classified into a category as yet.
SAVE & ACCEPT